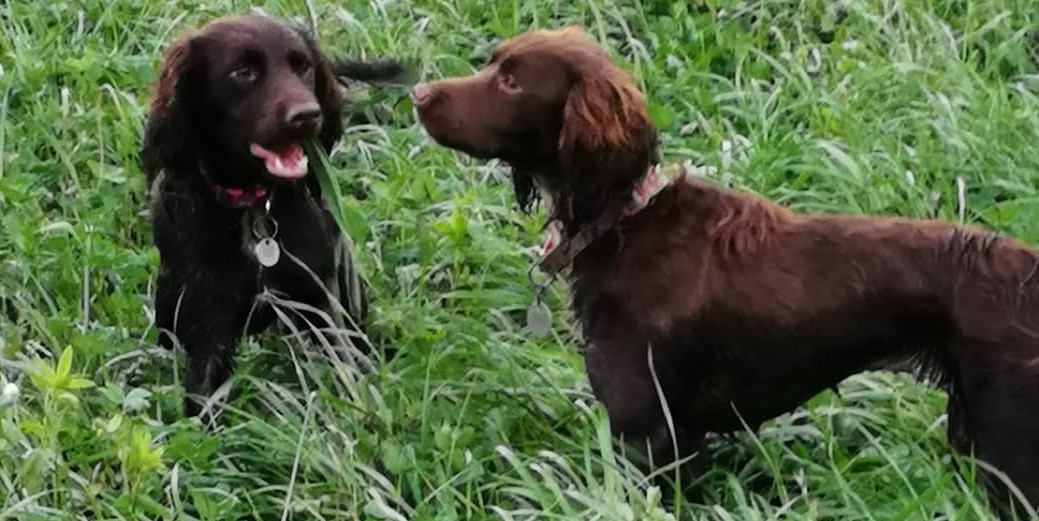 Dog Walking In Barry And The Vale Of Glamorgan 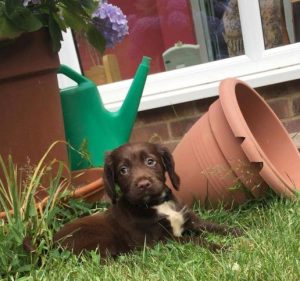 Coco as a puppy 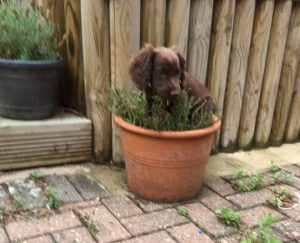 Millie as a puppy 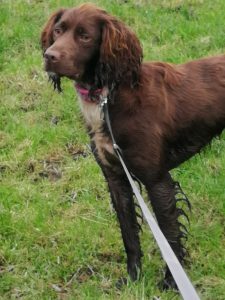 Coco’s owner describes her as a very sensitive dog, in her feelings, demeanour and stomach! She is very loving but very excitable and it can be hard to calm her down when she is on one! Recall was a big challenge for Coco. She did well as a puppy but her owner believes this was more to do with anxiousness than training. As soon as she felt confident on regular walks, she’d do ‘runners’ terrifying her owner. She would always come back but not until she was ready! This is understandable as Sprockers are known to have selective hearing at times and a stubborn streak.

Her owner persevered with training using an extendable lead and recall with a treat each time. They practised on walks and in the garden and after a month of intensive training they got there in the end. Coco’s recall is excellent now and she always comes back. Sprockers, like most Spaniels, are extremely food orientated and this with their high intelligence means they are highly trainable when there is a treat involved!

Another challenge faced by Coco’s owner was that Coco had to say ‘hello’ and be loved by everyone when out, including small children, who would be terrified of this very excitable dog running towards them at top speed. Sprockers are outgoing by nature, very affectionate and love to play with children. The recall training really helped with this and Coco was put on a lead and allowed to say hello in a calmer manner.  Coco will now come back or move away from people upon instruction. 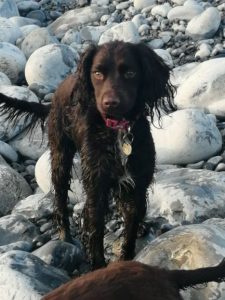 Millie is described by her owner as being the boss! She is not afraid of anything and can be very demanding at times. She will paddy if she doesn’t get her own way by barking. Millie has always been very good with recall, until she could see that Coco was getting away with it so her owner used the same training techniques with her as she used with Coco and Millie now has excellent recall. She is very nosey and needs to be involved in everything Coco does, to smelling the same area, pinching a toy from Coco’s mouth or chasing Coco to stop her in her tracks and bark in her face when out at the beach.

The barking in Coco’s face has been a big challenge with Millie. Every time this happens, both her owner and I will put Millie on the lead so that she learns that if she does this, she’ll be stopped from running around and discovering new smells. This now seems to be working as the frequency with which she does this to Coco is becoming less on each walk.

With regards to taking toys from Coco’s mouth, this is still an on going issue with Millie. Her owner uses the finger jab technique as her mum would have done to tell Millie to back away.

Places For Dog Walking In Barry And The Vale Of Glamorgan

Bred as working dogs to flush out and retrieve game, Sprockers need lots of vigorous activity to keep them happy and they love the great outdoors! It’s recommended they should have at least 60 to 80 minutes exercise a day.

Coco & Millie’s owner chose Spaniels as she wanted fun dogs and wanted to be able to do long walks and explore new places. She says you have to have the time and commitment to train them and always be able to keep them entertained as long walks aren’t enough for this clever breed!

A lovely place for dog walking in Barry and The Vale of Glamorgan is Gileston beach or Limpert Bay as it’s known. Gileston is a small village located between Barry and Llantwit Major. It became a designated conservation area in 1970 in recognition of its special architectural and historic interest. I just love walking Coco & Millie here and taking photographs of this beautiful area.

At the centre of the the village is a small green on which sits a Grade II listed red telephone box, one of the last remaining. The winding lane leading to the village is lined with high listed limestone walls. It’s a beautiful village with the Church and Manor House at it’s centre. It also has Rose Cottage, a Grade II listed building dating back to the 17th Century. Gileston village has held the prestigious title of ‘Best Kept Village in the Vale’.

The beach is mainly pebble and rock, rich in fossils but at low tide lots of rock pools and expanses of sand is exposed. The beach is overlooked by Aberthaw Power station which was built on the site of the old Barry Golf Club. Coco & Millie just love this beach and there are magnificent views across the British Channel to Exmoor and Minehead. There are also some fantastic sunsets there! 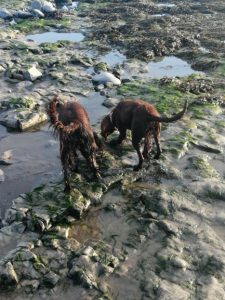 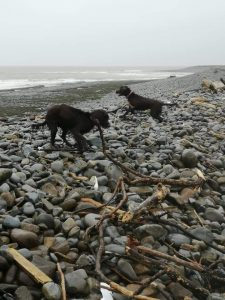 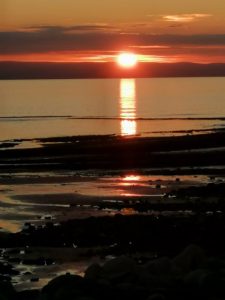 The beach has a free car park. Located here is The Limpert Guest House, originally a 15th Century boat house and also the remains of a cottage which was certainly inhabited in the late 1980s.

During World War II, Gileston beach’s defences formed part of the Western Command’s coast crust defences for The Vale of Glamorgan, resulting from the perceived threat of a German invasion from Ireland. At the top of the beach, running alongside it, you can still see the anti-tank stone cubes and some of these were signed by the soldiers who worked on them in 1940-1. 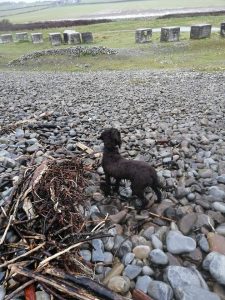 Millie overlooking some of the anti-tank cubes at Gileston beach

Gileston beach runs adjacent to the Wales Coast Path. The Wildlife Trust for Wales has helped record over one thousand species at this location. Coco & Millie just love exploring this vast expanse of fields and pathways. They love to get their nose into every nook and cranny of this beautiful landscape, interspersed with little streams, mud banks and grassy mounds. 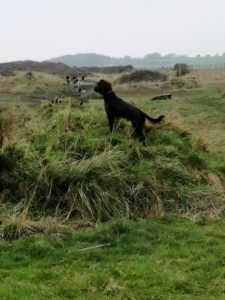 Climbing the mounds on the Wales Coast Path, Gileston 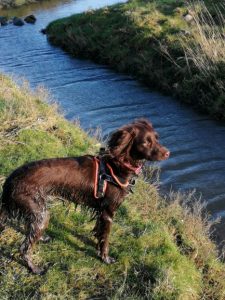 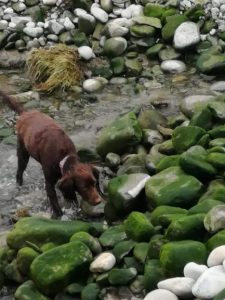 Sprockers love to dig and flush out small animals, in keeping with the hunting instincts of their ancestry. 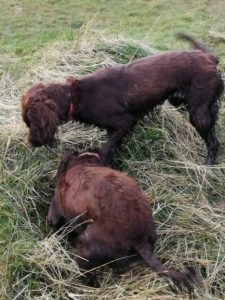 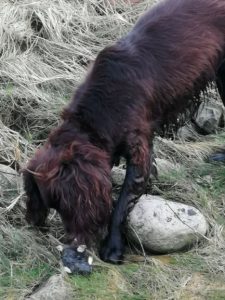 Millie has flushed out a mole, Wales Coast Path, Gileston

Spaniels also have a natural affinity with water and Coco & Millie never miss a chance to leap in whenever they can. 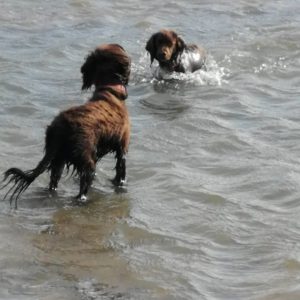 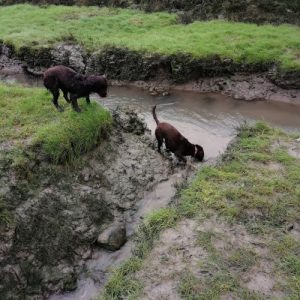 Getting ready to delve in the stream, Gileston

In the months when we had lots of rain, there was a lot of flooding along the Wales Coast Path and Millie and Coco took every opportunity to enjoy the water. 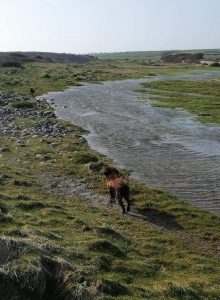 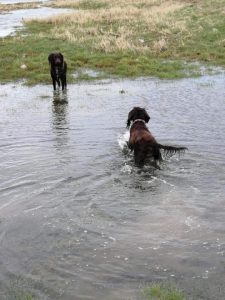 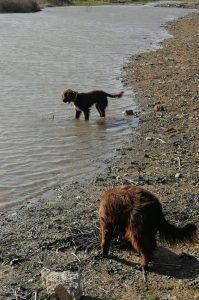 In spite of their differences, Coco and Millie adore each other and their owner says she could never be without them. I have enjoyed every minute of walking them and experiencing the wonderful Gileston beach and the Wales Coast Path. 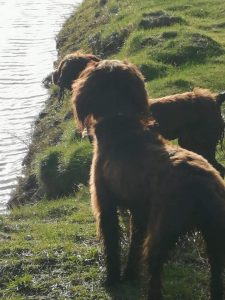 Perhaps you may know of some other lovely places for dog walking in Barry and The Vale of Glamorgan. Or perhaps you have some interesting insights into owning Sprocker Spaniels. We’d love to hear from you in the comments box. Get all our latest news on our FaceBook page!