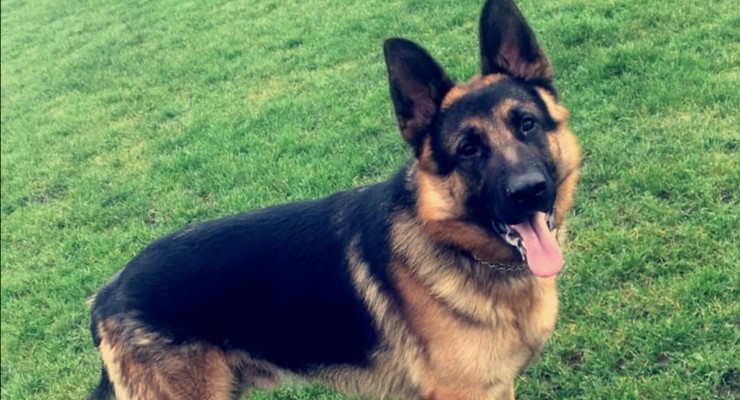 Dog Walking In Penarth With Chase 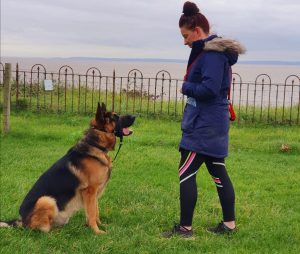 Chase having some training with his owner

When I started my dog walking in Penarth and The Vale of Glamorgan, Chase, the handsome German Shepherd, was one of my first clients. Chase hasn’t been an easy dog as he had some challenging behaviours at times and comes with his own training needs but the effort and dedication that his owner has consistently put into his training has worked wonders!

I have worked closely with Chase’s owner to ensure I practice his training on our walks and I can honestly say that we have grown in confidence together!

Places For Dog Walking In Penarth 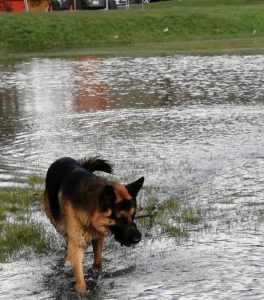 There are some fantastic locations for dog walking in Penarth and The Vale of Glamorgan. I’ve enjoyed walking Chase in the big field by Cogan Leisure Centre where he loves nothing better than to get muddy whilst playing fetch and the great thing about this field is that when it rains it has some fab puddles which Chase absolutely loves!! 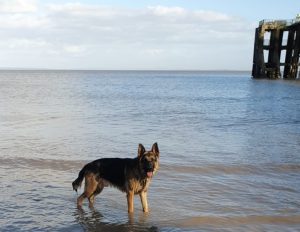 Then of course there’s the lovely Penarth beach and clifftops.  Chase’s owner says that Chase can go from walking with a very loose lead to a tank pulling cranes in seconds when he hears the sea! Once he sees the sea in sight he’s just so so desperate to jump straight in and then he is in his element! He is one hard dog to get back out of the sea though once he is in it! 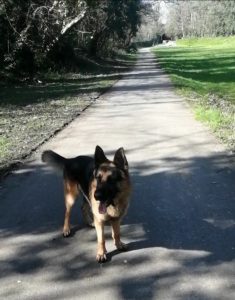 Chase in the Dingle

Another good place for dog walking in Penarth is the Dingle or Alexandra Park as it is known. I recently took Chase here before the lock down and he absolutely loves it. The Dingle Path was formed in 1883 by the Windsor Estate and is just off Windsor Road in Penarth, providing access from Penarth town and railway station to Windsor Gardens. 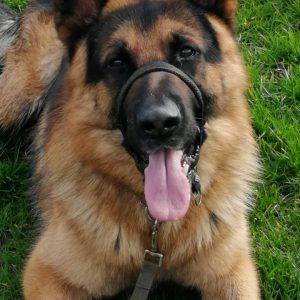 The German Shepherd was originally bred in the late 1800s in Germany for herding livestock. They are balanced, confident, watchful, courageous, intelligent and loyal with strong protective and guarding instincts. They belong to the top 3 smartest dog breeds. The first ever Guide Dogs were also German Shepherds. They get their intelligence from their ancestors in the days of herding livestock as they needed to be sharp, attentive and use their logic to herd livestock.

What Questions To Ask If Getting A German Shepherd Puppy 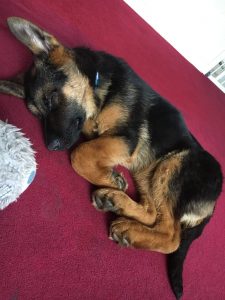 Chase as a puppy

Chase’s owner highlighted how important it is to do your research and ask the right questions before buying a puppy. She was so bowled over by the gorgeous Chase that she didn’t realise till the next day that the guy she bought him off had lied about the information he had put up on the advert – by this she means that Chase wasn’t vaccinated and there was no Kennel Club documentation that the breeder had promised he would send her.

So Chase’s owner had a 14 week old puppy who she couldn’t take out for at least another 6 weeks until he was properly vaccinated. This meant that Chase as a puppy missed out on his socialising skills. Socialisation and obedience training at a young age is so important in German Shepherd puppies in order to prevent over-guarding and aggressive behaviour.

So if you are thinking of getting a puppy ask if they have been vaccinated and see proof of vaccinations. health checks and worming. Check if the puppy has been microchipped. It is a legal requirement in the UK that all dogs must be microchipped by 8 weeks of age unless they have a certificate of exemption signed by a vet. Ask what training or socialisation the puppy has already been having. If they are registered with the Kennel Club ask to see the certificate. 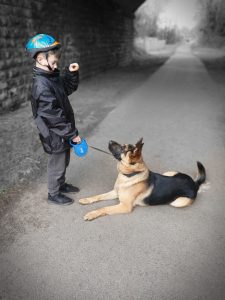 Chase is the third German Shepherd that his owner has had and for her the thing she loves most about Chase, and indeed about German Shepherds as a whole, is that they like nothing better than to please you and the family to which they belong. She says they make excellent family dogs and loves to see the bond Chase has formed with her son.

German Shepherds are very caring and possess a protective attitude towards their owners. Whilst some German Shepherds can have aggressive tendencies, they are not by nature an aggressive dog. With the right nurturing, socialisation and training from an early age, they can be a loving and protective family pet. 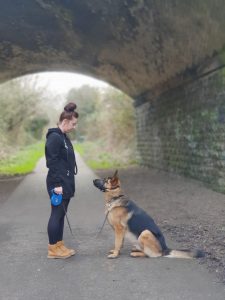 Chase training with his owner

One of the greatest challenges for Chase’s owner has been his training and learning the social skills when it comes to meeting and playing with other dogs. She soon discovered an excellent breakthrough, however, in the form of sausages! These were used as the reward factor in positive reinforcement, getting Chase to focus on her. I also take the sausages out with me on each walk I do with Chase, practising his walk to heel and basic commands.

Chase has come on so well these last few months. What is particularly inspiring is that Chase and his owner have never been to any training classes. All the consistent and dedicated work has been done by Chase and his owner together, using sausages and U Tube videos. German Shepherds flourish with owners who can give them focused attention, exercise and training and this has certainly been the case with Chase and his owner! 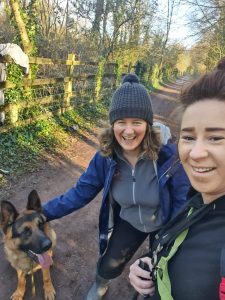 Myself with Chase and his owner

I hope you’ve enjoyed reading about Chase. Perhaps you are lucky enough to own a German Shepherd and have some other tips and ideas you’d like to share. Or you may know of some other great locations for dog walking in Penarth and The Vale of Glamorgan. We’d love to read your comments!