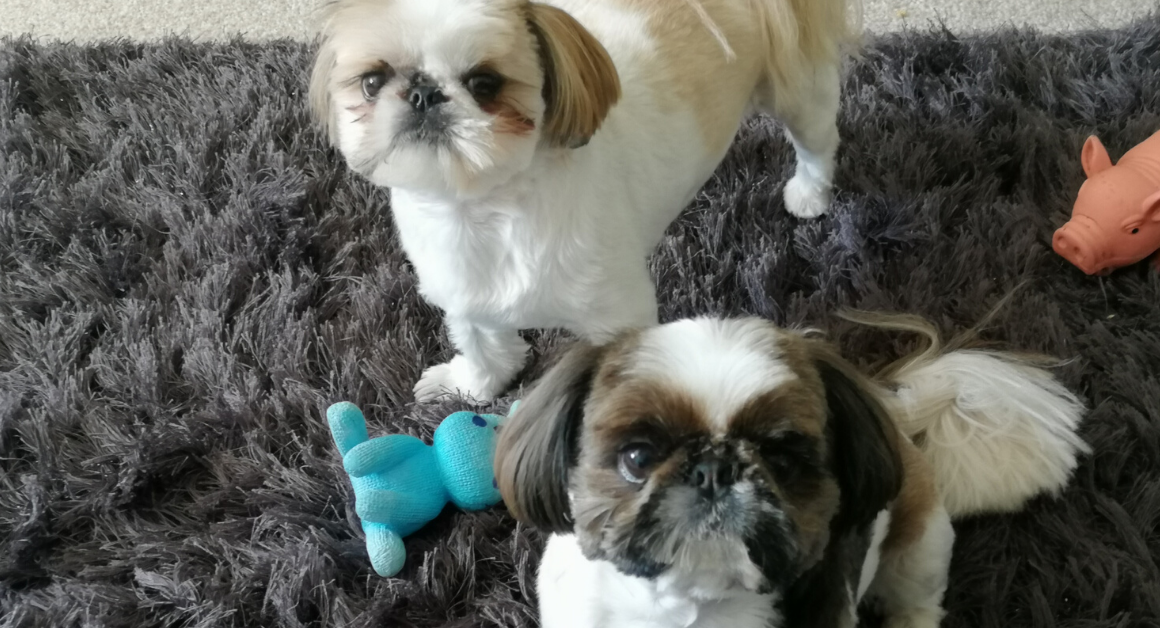 I was thrilled last year to start dog walking and pet sitting in Barry for the delightful duo Hugo and Harry. They are two beautiful teacup Shih Tzus who are now both 3 years old.

Hugo and Harry’s mummy initially intended just to get the one Shih Tzu. She had been following Karashishi Shihtzu on Facebook for a few years after she lost her beloved Chloe, a Cocker Spaniel. As you can imagine there were lots of cute puppies on the pages but one day a gorgeous face appeared and she instantly fell in love! She contacted the breeder to ask if she could reserve him, paid her deposit and asked if she could start calling him Hugo. Below is a picture of Hugo as a puppy. 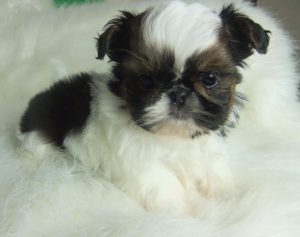 Hugo as a puppy

On arriving at the breeder’s house, Hugo and Harry’s mummy was immediately greeted by two tiny fluffy puppies running towards her (the size of a small guinea pig). The breeder said that they weren’t related as they were 3 days apart but they were best friends, loved each other and would not leave each other’s side. Hugo was initially quite standoffish and sat there staring with attitude but the other one was giving plenty of cuddles and kisses. Needless to say, she decided there and then to have them both and named the other one Harry! Below is a picture of Harry as a puppy. 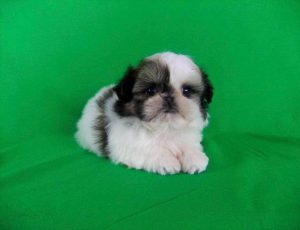 Harry as a puppy

Hugo and Harry share their home with Suky, a beautiful 19 year old cat who most definitely is the Lady of the Manor. They generally get along  just fine although Hugo once tried to jump on Suky’s back to play and Suky socked him one in the eye with her paw. This unfortunately caused Hugo to have an abscess in his eye. The vet’s bill came to £1600 but Hugo is now fully recovered with no after effects. Needless to say, Hugo now looks the other way whenever he passes Suky. 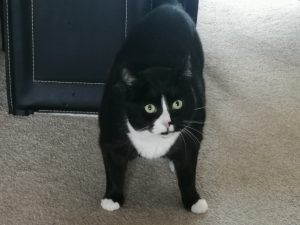 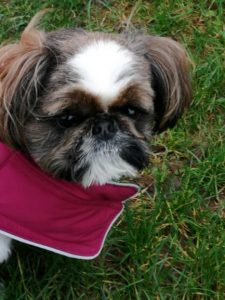 Hugo is 3 days older than Harry and when I first started dog walking and pet sitting in Barry for them, their mummy warned me that Hugo was the boss! He is such a character. He’s the smallest and has such tiny teeth that he can’t bark but squeaks. This in no way diminishes this little man’s courage, however, as if he sees any other dog on TV or out walking, he’ll puff his little chest out, put on a walk like he’s 6 foot tall and start having a fit! He’ll squeak like crazy at the other dog and do all possible to try to get to them. When this happens, both myself and Hugo’s mummy will usually pick him up and carrying on walking. Hugo is such a character. He just loves to watch TV and will squeak and jump if he sees any animal on TV. 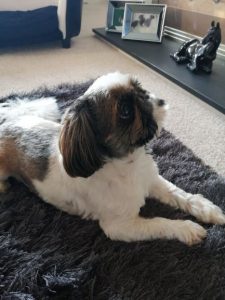 Hugo gets very jealous if he sees anyone giving Harry affection or attention and as his mummy says he will kick off and attack! I follow a set routine as advised by their mummy whenever I get them ready for a walk. I have to get Hugo ready first, put his coat and harness on and then put him in the cloak room while I get Harry ready. If I was to get Harry ready with Hugo in the same room, he would squeak uncontrollably, shake with temper and try and attack Harry.

Hugo is adorable though and he likes nothing better than lying on his back, with his legs spread and staring into space. He will often adopt this pose if he sees me giving attention to Harry bless him. I think it’s because he knows he looks super cute when he does this! 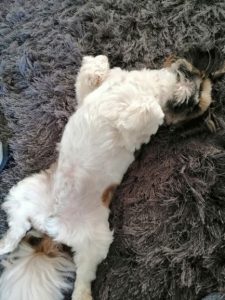 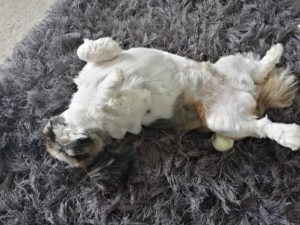 Hugo also likes nothing better than being held like a baby in your arms. Below is a picture of me with Hugo when I was pet sitting in Barry for them. 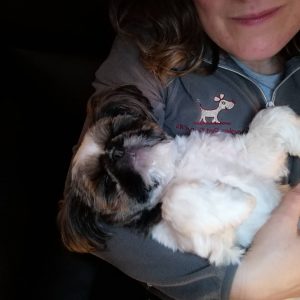 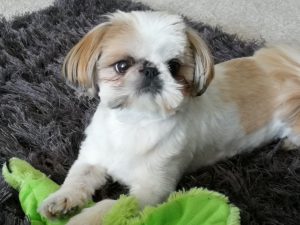 Harry is not as feisty as Hugo and doesn’t bark at or want to fight other dogs. Harry tends to freeze if Hugo tries to bark at him or antagonise him. Whereas Hugo walks with attitude (his owner and I joked he walks like John Wayne), Harry tends to be more regal and elegant in the way he walks. I think it’s safe to say that Harry is the more refined one out of the two! He also likes to walk on the left hand side and is very particular about this. Harry is a very loving little dog who likes nothing better than playing with his favourite squeaky toy the pink pig!  Although his mummy has felt like throwing it out the window at times after the incessant squeaks!! Harry is not so refined though in taking treats as he tends to grab it and run (maybe he is worried Hugo will steal it from him!). 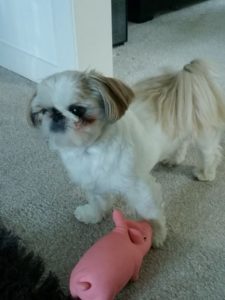 I love my squeaky piggy, though it drives Mummy insane! 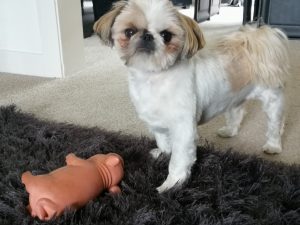 Hugo better keep his paws off my pink piggy!

When travelling in the car to locations for dog walking in Barry, I have to put Harry in the front seat first and then put Hugo in the back. I try to arrange things so that they can’t look at each other in the car as Hugo has a tendency to try and antagonise Harry. They often have ‘face-offs’ in the car, instigated by Hugo, where they will bark at each other. Hugo can get himself quite worked up where he will shake in temper! I usually tend to play some nice classical music when I am in the car with them, to divert any squabbling! Below is a picture of them both having a ‘face-off’ in the car. 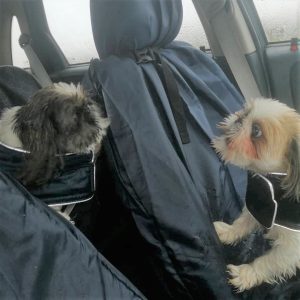 Here’s Hugo doing his level best to antagonise Harry who is sat in the front seat of the car….. 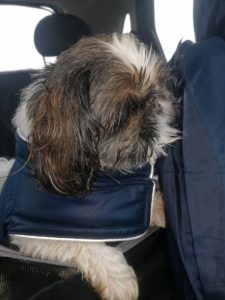 And as you can see from Harry’s face below, he sure isn’t impressed! 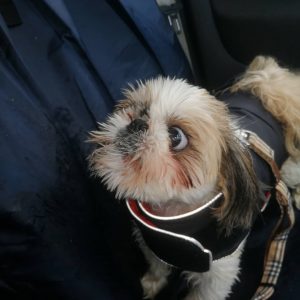 They are such a comical pair though. Once their mummy just popped out of the car for 5 minutes to pay for something in the petrol station and before she knew it the car alarm was going off, the lights flashing and all she could see in the car window was Hugo and Harry’s heads, bobbing up and down, barking at each other. They had set the car alarm off!! Here’s Harry peeping out the car window after setting the alarm off! 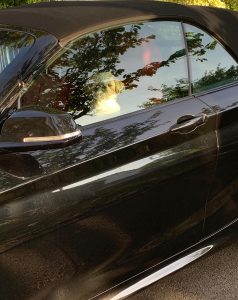 In spite of their differences and squabbles, Hugo and Harry really do love each other and they like to sleep close together as you can see in the pictures below. 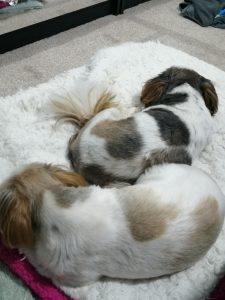 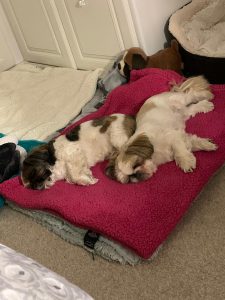 They also enjoy going out together on their walk, after Hugo calms himself down. 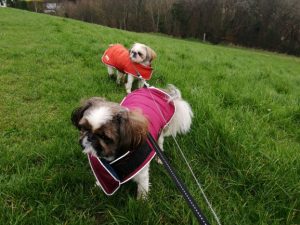 I hope you have enjoyed reading all about Hugo and Harry and their wonderful characters. Perhaps you are lucky enough to own one of these lovely dog breeds and have some interesting insights or stories to share. We’d love to hear from you! Please add your comments in the comments box.