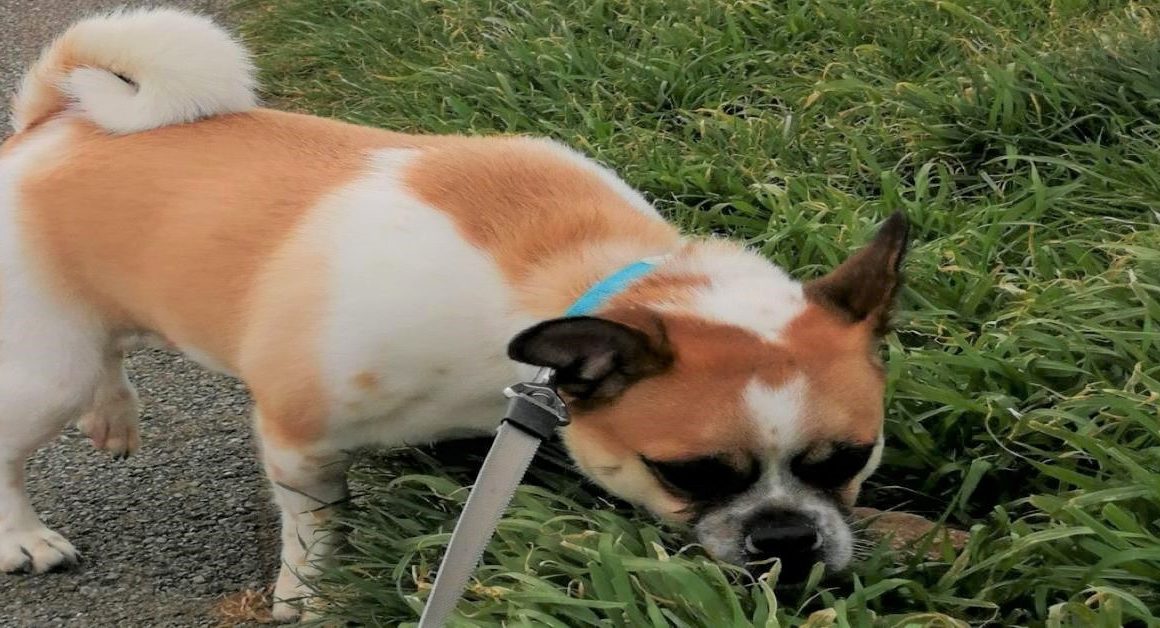 Pet Sitting In Barry And The Vale Of Glamorgan

I love doing my pet sitting in Barry and The Vale of Glamorgan and in February I had the absolute pleasure of looking after Ernest, a gorgeous Jug, who lives just around the corner from me in Barry. Ernest is 2 years old now and shares the same birthday as his owner’s eldest son so they are forever Birthday Buddies! Here are some gorgeous photos of him taken as a puppy. 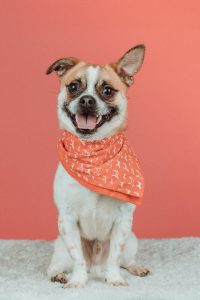 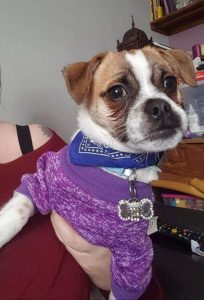 The Jug is a hybrid created by crossing two pure breeds – the Jack Russell Terrier and the Pug. First bred in America in the 60s, the Jug has become one of the most popular hybrid dogs around. They are also known by the names of Jack Pug and Pug Russell. They tend to be slightly lighter than the Pug but sturdier than the Jack Russell with a muscular frame and short legs that are well muscled. Jugs have also inherited the curly tail of the Pug. 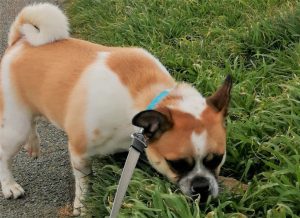 Ernest with his curly tail!

Although Jugs can still suffer from the breathing problems typically associated with the Pug, they suffer less so due to inheriting the slightly longer nose of the Jack Russell. Jugs have large expressive eyes and have the furrow or frown when they are alert or interested in something which adds to their endearing look. When Ernest’s owner first went to see him, she described him as being doe-eyed and super cute, with really unusual tri-colouring. He looks like he has freckles on his legs. 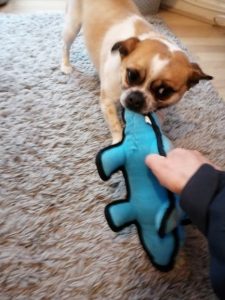 Ernest with his freckly legs

Jugs are high energy dogs due to the Jack Russell in them. The often over the top Jack Russell energy, however, is tempered down somewhat by their Pug side. When Ernest’s owner first brought him home she describes him as being an angel on the car journey home which was terribly misleading because once he settled in at home, he was a crazy bag of endless Jack Russell energy! Jugs need about 30 to 40 mins exercise a day to keep them happy.

Dog Walking In Barry And The Vale of Glamorgan

There are so many fantastic locations for dog walking in Barry and The Vale of Glamorgan and since Ernest’s family moved to Barry, he’s especially loved his trips to the beach. When I was dog sitting for Ernest, I loved taking him to Whitmore Bay and over the clifftops to Jackson’s Bay in Barry. Dogs are allowed on Jackson’s Bay all year round but not in the summer months on Whitmore Bay. 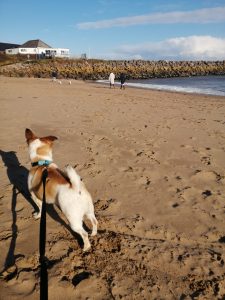 Ernest always keeps a close eye on his two human brothers as they explore the rocks and paddle in the sea. Ernest doesn’t like the sea, however, and prefers to keep a safe distance from the water. Some Jugs like swimming whereas others don’t even like getting their feet wet! I’ve found that some Jack Russells also don’t like the sea. They love playing fetch on the beach but will shy away from getting their feet wet! Some Jugs have flatter faces and can find it harder to breathe when they are in the water so care should always be taken if they go swimming. 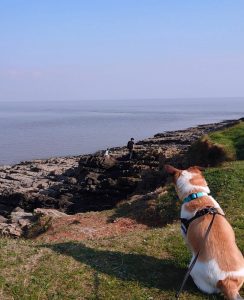 Ernest keeping an eye on his 2 human brothers. 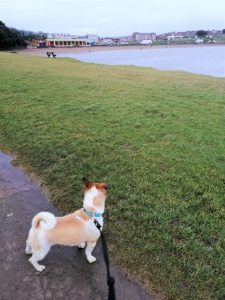 Jugs have inherited their love of food from their Pug side and you have to watch out for weight gain. Ernie has developed his unique particular skill of walking and standing on his two back legs for an extended period of time as he hunts for contraband/food left on the kitchen work tops.

When I was preparing to do my pet sitting in Barry for Ernest, his owner advised not to leave anything on the kitchen work surfaces as Ernest would hunt it down and eat it! Ernie is very partial to a stolen sausage or chicken nugget! He’s also a fiend for the rubbish bin. His owner once found him as a puppy head first inside the rubbish bin, see-sawing with his chubby tummy stuck on the rim of the bin and his back legs frantically kicking in the air! 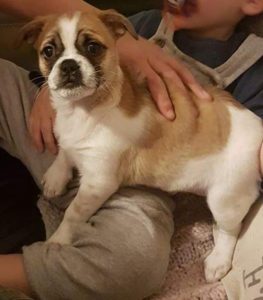 Ernest with his toddler brother

Jugs are fun loving and endearing little dogs and can make wonderful family pets providing they are socialised from a young age. As they can be quite boisterous and high energy, however, they tend to do better in households with older children who therefore know how to behave around dogs. There’s also always the risk of them knocking toddlers over.

Jugs can also be quite sensitive by nature and Ernie is prone to a lot of anxiety. His owner tried many different routines and approaches to try and manage his anxiety while always keeping him around the family but she found his nervous energy really difficult to handle. Ernie also struggled with training as he was way too excitable to focus on anything more than learning a basic sit command. 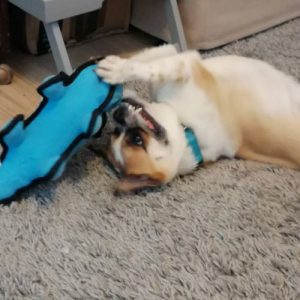 Ernest playing with his favourite toy.

When I first met Ernie I could see how high energy he was, particularly around his younger human brother! Together they were a mass of unleashed energy! During my week of pet sitting in Barry for Ernest, however, I found that after walking and playing with him, he would eventually calm down and learn to settle in the living room. I would stroke him and talk calmly to him, whilst ensuring he did not jump up on the sofa. We got to the stage where he would contentedly fall asleep each night by my feet whilst I watched Emmerdale! 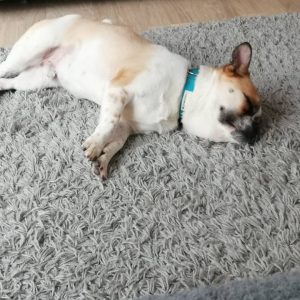 Ernest asleep on the rug

I sent some photos of Ernie relaxing and asleep in the living room to his owner. She was so pleased to see how well behaved he could be when given some calm adult attention. When Ernie’s owner returned home, she changed her toddler’s bedtime routine to enable her to have quality adult time with Ernest and this has payed dividends!.

Ernie is now so better from this change that he is like a new dog! His daily bad stomachs have completely cleared up! Ernest is now mostly happy after his walk to stay out of the toddler’s way knowing that he’ll get uninterrupted attention from his mummy in the evening. Now Ernie’s owner really enjoys her quality time with him and it’s created a really strong bond between them. Ernie is now even allowed up on the sofa as he loves to snuggle up in the blanket for a nap! 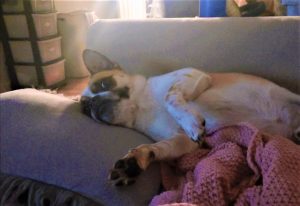 Snuggle time on the sofa with Mummy!

I hope you have enjoyed reading all about Ernest. Perhaps you have a Jug and would like to share some interesting insights? Or perhaps you know of some other good locations for dog walking in Barry and The Vale of Glamorgan? We’d love to hear from you! Please add your comments in the comments box.

Get all our latest news on our FaceBook page